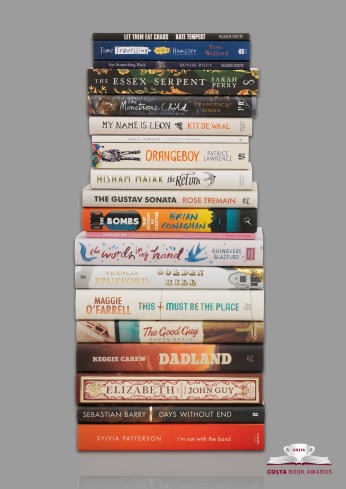 Another big award ceremony has arrived and the shortlist announced. Running since 1971 and celebrating the best in British and Irish writing, The Costa Book Award has five categories in which a winner is chosen in each, and then a single overall winner is chosen as Book of the Year. As it pits books from very different disciplines against each other it is an award that is both admired and filled with scepticism: how can one pick a ‘best book’ from categories as different as children’s and poetry?

Who knows, but somehow the judges manage it each year. Last year’s winner was Francis Hardinge with The Lie Tree, which continues to be a popular read for children and adults alike, with its dark themes and lyrical prose.

This year’s shortlist is already getting a lot of positive attention for the number of female writers selected, being significantly higher than in previous years.

As there are so many titles involved, let’s just take a brief look at the titles in the running for this year’s Costa Book Awards.

Days Without End by Sebastian Barry

This Must Be the Place by Maggie O’Farrell

The Essex Serpent by Sarah Perry

The Gustav Sonata by Rose Tremain

The Good Guy by Susan Beale

My Name is Leon by Kit de Waal

The Words in my Hand by Guinevere Glasford

Dadland: A Journey into Uncharted Territory by Kerrie Carew

The Return: Fathers, Sons and the Land In Between by Hisham Matar

I’m Not With the Band: A Writer’s Life Lost in Music by Sylvia Patterson

Say Something Back by Denise Riley

The Bombs that Brought Us Together by Brian Conaghan

The Monstrous Child by Francesca Simon

Time Travelling with a Hamster by Ross Wellford

For more information on all the titles, visit: http://www.costa.co.uk/costa-book-awards/welcome/

Published by J A Vennall

View all posts by J A Vennall